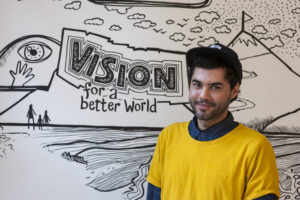 Jarrod-John Du Plooy is an Executive Producer and cultural events manager who also hosts a daily cultural radio show at the Gwangju Foreign Language Network (GFN) in South Korea. His has worked in New York, London and Cape Town. After completing his MBA in Cultural Content Management in Seoul, he now focuses his attention on creating media contents concerning Cultural Diplomacy and the role of Diversity, Inclusion and Representation in a transcultural world.  He has featured as a guest on a television series about Culinary Cultural Diplomacy with Chef Gizzi Erskine, and this year has worked on projects including the 2019 FINA Swimming Championships, Gwangju Design Biennale, was part of the Future Innovators Summit with ARS Electronica in Austria and was a speaker at the Inclusion, Mobility and Multilingual Education Conference in Bangkok hosted by the Asia-Pacific Multilingual Education Work Group in partnership with UNESCO and UNICEF.”